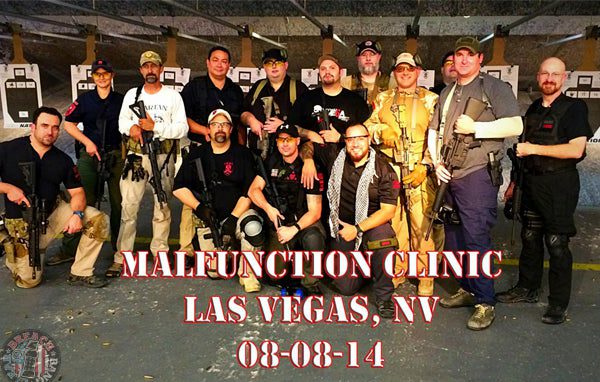 The following article was written on a manual typewriter by a man on horseback. See, a few months back our minion John Marrs (a professional mustache-grower and lever-action aficianado) went to the ZERT Malfunction Clinic. We asked us to let us know what he thought, not least because we’re at least a little iffy about taking anything ‘zombie’ seriously – though we’ve heard good things about ’em. Here’s what he had to say. Mad Duo For a while now I’ve been hearing a lot about this group called Z.E.R.T. (Zombie Eradication Response Team). Like many of you, I’ve seen their videos and read a few things about them. They looked squared away, so I drove out to Las Vegas a few months back for a clinic. The clinic was on clearing malfunctions on the AR rifle and semi-auto pistol. Granted, the 3-hour clinic was aimed toward the new shooter, but it was a good chance to check out the organization and capabilities of ZERT. Prior to the training I stopped by the ZERT office, where I met Clare and Vee. They were up to their asses in alligators processing, packaging and shipping swag and new member packages. The girls were professional and friendly, taking time to talk with us and give us some swag. They also gave us directions to the range facility, (American Shooters) as well as to the pub where students gather after training. We photoshopped Solitaire off the screen The instructor for this clinic was ZERT co-founder and CEO, Aaron Mauldin. Aaron has served in the United States Marine Corps, worked Special Projects for a Private Security Firm, and has 8 years of Close Protection experience with multiple Fortune 500 companies. Serving as the CEO, Aaron doesn’t normally do much of the actual teaching. Why would he? He has a very deep roster of “Tier 1” SOF personnel and SWAT cops for that. It was, however, nice to see that the CEO is still a warrior himself as well as a gifted instructor.

Starting in the classroom, Aaron laid out the importance of the four firearms safety rules as well as his own 5th rule of “Always know the condition of your gun”. He explained that three hours was just enough time to familiarize students with each technique. It is the responsibility of each individual to train on them later until they become reflexive. Heavy emphasis was placed on attention to detail while shooting and that only hits count. Trying to shoot too quickly not only leads to lost accuracy but sloppy gun-handling and trigger control. Aaron encouraged students to continually assess their mechanics (grip/stance/trigger control) as well as accuracy (hits on target) while training. This approach calls for constant self-evaluation, and teaches the student to continually think through whatever they are doing.

Maintenance and regular inspections of your weapon were discussed. In particular, magazines and the inappropriate love affair some people have with them. We’ve all seen (or been) that guy that develops a deep emotional bond with his old magazines and even when they fail, keeps them for “training only”. As bad magazines are the most likely cause of many malfunctions, it was stressed that you should shitcan bad mags and replace them. The acronym MEAL was introduced as a procedure for checking your weapon. It stands for Magazine, Extractor, Ammo, Lube. If these four areas are squared away, it is likely your weapon will continue to run. ZERT takes a diagnostic approach to assessing and clearing malfunctions (insert your contradictory comment here). Yeah, yeah, I know some people prefer to use one technique that clears everything, but like any other tactic there are pros and cons to each concept. Type one, two and three malfunctions were covered for both pistol and rifle. In addition, a few lesser known types of malfunctions were discussed that occur with rifles. A Type 4, also known as a “Bolt Over” is where a spent casing gets trapped inside the charging handle above the bolt. It doesn’t happen very often, but it does happen. While I have seen these a few times, this was the first training course I’ve ever been to where it was covered. In addition, he covered a Type 7 malfunction (yes, he made up the name). The Type 7 is when a blown out primer gets lodged in your trigger assembly. Again: rare but possible. This obviously requires you to disassemble the rifle to get it out. The importance of the training is to recognize the symptom, which is a failure to fire and a trigger that does not move. While discussing various malfunction types, Aaron demonstrated the clearance of each with dummy rounds. His demonstrations were smooth and he explained each sequence clearly. Throughout the classroom and range portions, Aaron’s experience and sense of humor kept the students involved and at ease. As a first experience with ZERT, I was happy to learn they are what they claim to be (in addition to being friendly and professional). I’ll be taking more classes with them in the future. Though based in Las Vegas, they conduct training courses at locations across the country, including a big event in Tulsa, OK this October. For more info check out their website www.zertnation.com Writer John Marrs Breach Bang ClearAbout the Author: John Marrs is a retired Patrol Sergeant who served the San Luis Obispo County Sheriff’s Office (CA) for over 25 years. He worked on the department’s SWAT team with both Entry and Sniper elements was well as holding the Sniper Team Leader billet. Marrs is a co-founder of his agencies Patrol Rifle training program, was a firearms instructor for his department, the basic police academy and the International Association of Law Enforcement Firearms Instructors (IALEFI). He is also the owner (and now full time director) of Spartan Training Resources in Atascadero, CA (also on Facebook here). In addition to his LEO service, Marrs spent 6 years in the U.S.Army and 15 years in the Army National Guard as an Infantryman. He worked his way to Staff Sergeant, then went to the Dark Side and completed Officer Candidate School, retiring as a Captain. He freely admits, “Yes, I went to OCS because I realized Officers carry less, walk less, dig fewer fighting positions and generally do less than a grunt.” Sounds legit – at least he’s honest.

No comments to show.

Request training in your area

Help! My package has been lost...

Offer discounts to ZERT Members?
My cart
Your cart is empty.

Got a discount code?
SubtotalUSD$0.00
Shipping
TotalUSD$0.00
Your cart is empty. Shop now